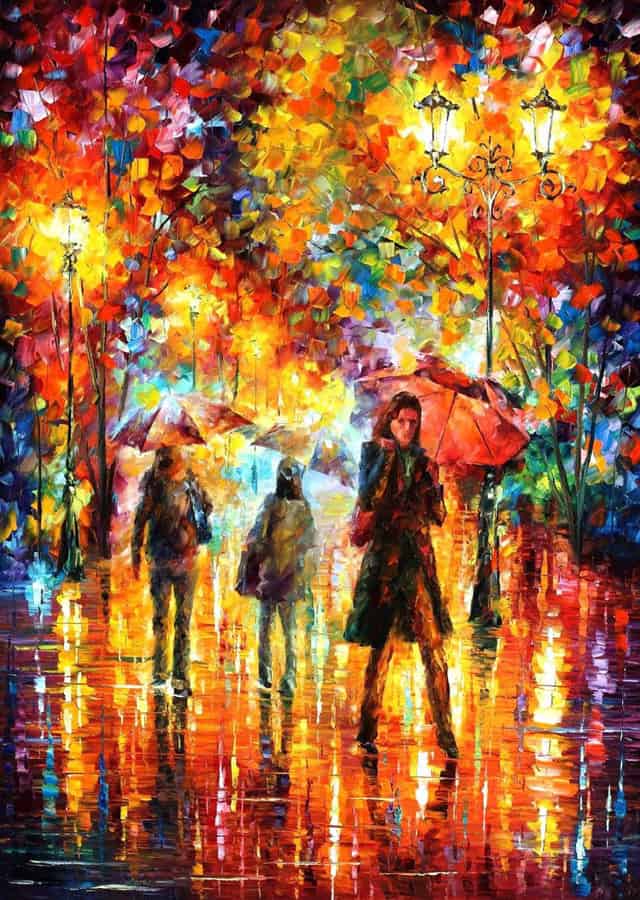 Leonid Afremov (born July 12, 1955 in Vitebsk, Belarus) is a Russian – Israeli modern impressionistic artist who works mainly with a palette knife and oils. He developed his own unique technique and style which is unmistakable and cannot be confused with other artists. Afremov is mainly known as being a self-representing artist who promotes and sells his work exclusively over the internet with very little exhibitions and involvement of dealers and galleries. Before the advancement of online sales and ebay, Afremov was a struggling artist. He was born in Vitebsk Belarus and lived there until 1990, between 1990 – 2002 he lived in Israel and between 2002 – 2010 in Boca Raton, Florida. Afremov currently resides in the popular resort town Playa Del Carmen, Quintana Roo, Mexico near Cancun. He paints mainly landscape, city scenes, seascapes, flowers and portraits. Most of his work is considered very colorful and politically neutral.

Leonid Afremov keeps the majority of his art politically neutral. His paintings are not offensive to anyone nor send any hidden messages. The paintings usually reflect certain personal memories and emotions. Leonid Afremov tries to draw the viewer to have a certain feeling rather than tell a story via the painting, or have the viewer see the world how the he sees it. The neutral attributes of Afremov’s art make the paintings appealing to almost any social, ethnic and age group. Leonid Afremov has been traveling quite extensively and has taken many photographs of different scenes that he later painted. Almost every painting he painted has a very personal inspiration. His art can be reflected as very positive through the bright colors he uses. Leonid Afremov loves cats and other animals; he has had cats throughout his entire life. He has painted many paintings of cats, dogs, horses, tigers and even giraffes. The only political paintings he has are of bull-fighting , where he tries to show the viewer the cruel nature of the sport and discourage the viewers from liking bull-fighting.

Check his gallery with more than 2000 pictures at DeviantArt